2016 was a challenging year for the Alberta economy.  Despite the economic slowdown, Superior Steel had a busy year, working on projects all over Alberta and British Columbia. In 2016, we employed an average of 25-30 iron workers and welders, worked over 42,000 man hours and installed over 2,300 tonnes of structural and miscellaneous steel.

2016 was the year of schools, as we completed school modernization projects and new construction on:

Other noteworthy projects completed in 2016 included a new administrative building for the BC Government Employees Union in Fort St. John, BC, a large scale renovation of Safeway in Dawson Creek, BC and the BC Hydro Operations Centre in Vernon, BC (570 tonnes). 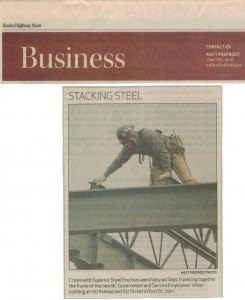 In 2016, Superior Steel also expanded it's customer base and forged new partnerships to ensure our future success.  We were happy to welcome Devlin Day as Erection Foreman, who joined our team in September. Superior Steel's management team sincerely thanks all employees for their hard work and dedication throughout 2016, and we look forward to a successful 2017!